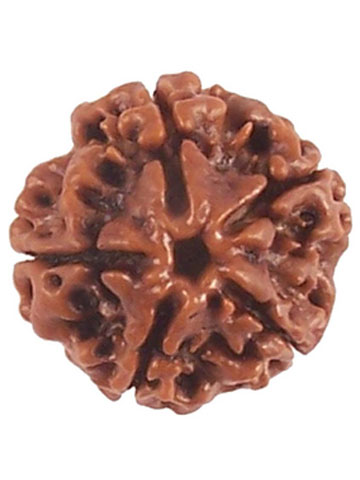 Four (Char) Mukhi Rudraksha has Four complete line dividing from top of the seed up to its bottom. The ruling deity of this Rudraksha is Lord Brahma who is the creator of universe as well as the bestowed of knowledge and creativity. Being influenced by the creative wisdom of the four headed Lord Brahma, it gives the wearer the creative power and provides him learning and knowledge and all the four results Dharma, Artha, Kama, Moksha. This Rudraksha also positively affects speech of the person. Students wearing this Rudraksha are able to perform better in their studies due to increased memory power and concentration.

How to Wear :
Single Bead of the Four (Char) Mukhi Rudraksha should be washed with the mixture of Ganga Jal and Unboiled Milk. Then, It should be capped with Gold or Silver and fastened with Red Thread. It should  be touched to the Shivling and worn around the neck by chanting the mantras or alternatively it can be kept in the place of worship.

Benefits :
Four (Char) Mukhi Rudraksha increases the power of original thinking, knowledge, learning and creativity. Ancient Vedic Texts says, a Four (Char) Mukhi Rudraksha is also very useful if a person is suffering from the Problem of Stammering, Disorders of Kidney, Thyroid, Disorders of Brain with Psychiatric Symptoms, Stammering, Memory Lapse etc. Wearing this Rudraksha helps to reduce mental problems. It increases the power of logical, positive thinking, creativity, memory power of intelligence. The oratory and writing skills of the wearer are highly increased by the blessings of Goddess Saraswati. This Rudraksha increases the wit and intelligence of the wearer. It makes the voice of the wearer sweet.